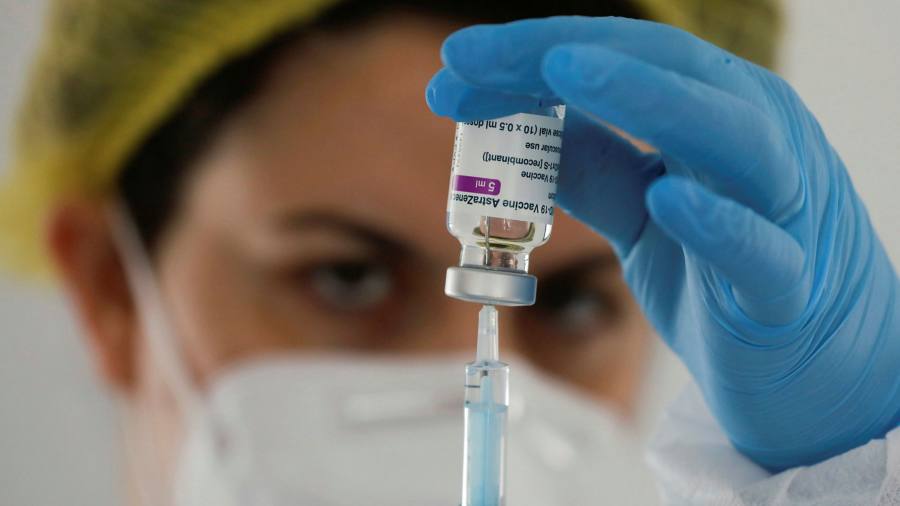 German government health advisers have signaled they may allow older people to receive the Oxford / AstraZeneca Covid-19 vaccine as EU governments come under increasing pressure to clear the stockpile of unused doses.

Thomas Mertens, head of the German vaccination commission, told German television station ZDF that there would be “an updated recommendation” “very soon” which “will make adjustments on this point” – referring to the decision to recommend the use of the jab for the sub -65s only.

His comments come at a time of growing concern that AstraZeneca’s shooting stocks are pile up unused in Europe, amid widespread doubts about its effectiveness among populations in Germany, France and elsewhere.

As of Saturday, Germany had administered just 363,645 of the 1.45m doses of the two-shot vaccine that had been given – only 25%. Regional health officials said thousands of people did not show up for appointments after learning they were going to be injected with AstraZeneca.

France had administered 16% of the 1.1 million doses of the vaccine it had received since the first delivery in early February, according to data from the Ministry of Health on Friday. There have been reports of hesitation and side effects among healthcare workers.

German officials said a major reason for low vaccine uptake was the recommendation by the Standing Committee on Immunization not to use the vaccine on people over 65 – a decision prompted by it. declared to be a lack of reliable date on its effectiveness for this age. group.

In France, only people aged 50 to 64 with co-morbidities and health workers received the vaccine, while Spain advised not to use it in people over 55. Italy offers the vaccine to people under 65. In contrast, the European Medicines Agency, the EU regulator, has supported its use for all people aged 18 and over.

“We have never criticized the vaccine. . . just that the data set for the over 65 age group was not good, or was not adequate, ”Mertens said, adding that the commission’s view on the vaccine had improved. “In light of new incoming data”.

He cited a new Scottish study, which has not yet been peer reviewed, showing that the AstraZeneca vaccine reduced the risk of hospitalization four to six weeks after vaccination by 94% after a single shot.

His words echo those of French health officials, as well as Chancellor Angela Merkel and French President Emmanuel Macron, who have tried in recent days to restore public confidence in the vaccine. After saying in January that the vaccine was “almost ineffective,” Macron said on Friday that he would take it if offered to him.

The French High Authority’s Vaccine Commission declined to give a timeline on when it could revise its advice on using AstraZeneca, but said it was constantly evaluating new data, including the Scottish study. France’s health minister has asked the commission to look at the data and say whether current policy needs to be adjusted.

Meanwhile, a growing chorus of German politicians is calling on Germany to relax its strict rules on who is eligible for a vaccination. Winifred Kretschmann, Prime Minister of the great southwestern state of Baden-Württemberg, called for rethinking immunization priorities: “We cannot afford to let the unused vaccine hang around because some of those who are entitled to it reject it. . He told German newspaper Welt am Sonntag.

“We should relax this strict regime and vaccinate people, even if, under the prioritization system, it is not necessarily their turn,” he added.

A similar point was made by Michael Kretschmer, Prime Minister of Saxony, in an interview with the Frankfurter Allgemeine Sonntagszeitung newspaper. He said the current regime limiting vaccines to the highest priority groups should be rolled back quickly as it relates to AstraZeneca.

“The prioritization system was a way to manage a shortage [in the availability of vaccines], “he said.” Now we see that there is more of it than can be administered, at least in the short term. “

Separately, Germany announced on Sunday that it was tightening its rules for people entering the country from the French Moselle region, amid concerns over increasing cases of more infectious coronavirus mutations, including the variant that emerged in South Africa.

Travelers entering Germany from the Moselle will be required to present a negative Covid-19 test that is no more than 48 hours old. Airlines, buses and railways can no longer transport passengers from the Moselle to Germany. German citizens and foreigners living in Germany will be exempt, as will the traffic of goods.

The French Minister for Europe, Clément Béaune, declared that he “regretted” the German decision. “It means a number of border slowdowns for working people,” he said. “We are doing everything to preserve work on both sides of the border.”