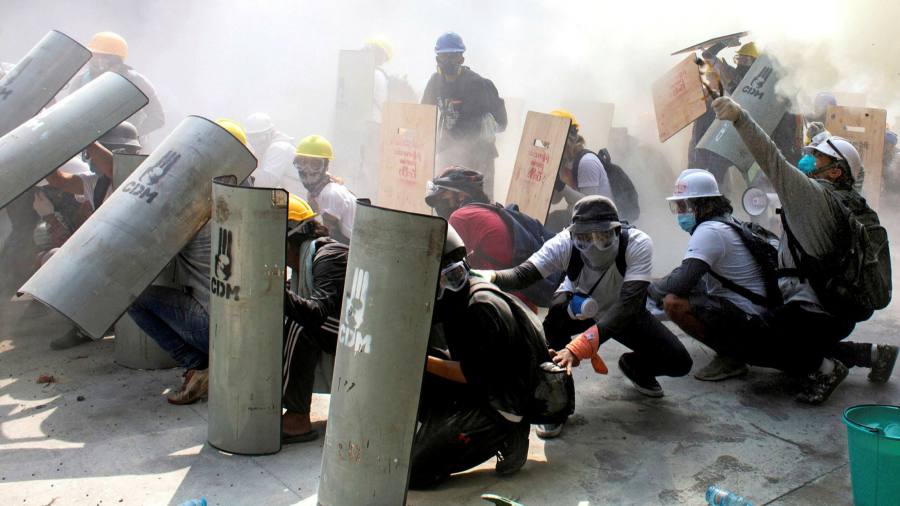 The Burmese junta has ordered foreign embassies, United Nations agencies and other international organizations in the country not to speak to “illegal entities” representing the political party of Aung San Suu Kyi, which it expelled from power this month -this.

The regime’s warning to embassies came as representatives of Aung San Suu Kyi’s overthrown government solidified their drive for international recognition, amid a sharp escalation of government repression. military regime Sunday, it turned parts of Yangon into combat zones.

Police and soldiers on Sunday fired live ammunition, stun grenades and tear gas at crowds in Myanmar’s largest city, and clashed violently with protesters in Mandalay, the second city, Dawei in the south, and in several other cities, including in states belonging to ethnic minorities. At least 18 people died in the worst day of violence since the coup, and hundreds were arrested during the weekend.

Myanmar’s military-controlled Foreign Ministry directive, dated February 26 and seen by the Financial Times, said the formation of groups such as the Committee representing the Pyidaungsu Hluttaw (CRPH), or the parliament, formed by deputies dismissed in the coup d’état of February 1, were illegal.

“The ministry would therefore like to advise all diplomatic missions, United Nations specialized agencies and international organizations accredited to Myanmar to refrain from contacting or communicating with these illegal entities,” said the directive.

Myanmar State Television reported on Saturday that Kyaw Moe Tun had been sacked as the country’s ambassador to the UN after denouncing the coup, publicly breaking with the junta and urging the world to support the CRPH in a speech to the general assembly.

“It is clear that we do not all want to go back to the system we were in before,” he said, raising three fingers at the end of his speech in a move popularized by democracy protesters in Myanmar and in Thailand.

The CRPH was formed on February 5 by deputies from the National League for Democracy who managed to avoid arrest after Aung San Suu Kyi’s government was overthrown by General Min Aung Hlaing. The military commander declared a state of emergency for a year and promised to revive an election won by the NLD after making unsubstantiated allegations of electoral fraud.

Sa Sa, the UN envoy of the CRPH appointed last week, says the FT that the CRPH planned to form its own “interim government” in Myanmar in the coming weeks and seek recognition from the United States, the United Kingdom and the United Nations.

Southeast Asian governments, led by Indonesia, are seeking to defuse the crisis and last week held talks in Bangkok with Wunna Maung Lwin, the junta’s foreign minister. The meeting infuriated NLD supporters and Aung San Suu Kyi, who is under arrest and facing criminal charges.

Popular sympathy for Myanmar’s protest movement has spread among democracy activists elsewhere in Asia, through an online “Milk Tea Alliance”, which called for mass protests on Sunday. Bangkok and elsewhere in the region.

On Saturday, Woodside, the Australian energy company, became the latest foreign investor to pull out of Myanmar, saying it “condemns human rights violations” and would demobilize its offshore exploration drilling team there within weeks. to come up.

“Reports of violence against the Burmese people participating in peaceful protests are deeply distressing,” the company said. Woodside was blasted by human rights groups after its chief executive Peter Coleman apparently rejected the coup and said the company was going to pursue a gas project in the country.