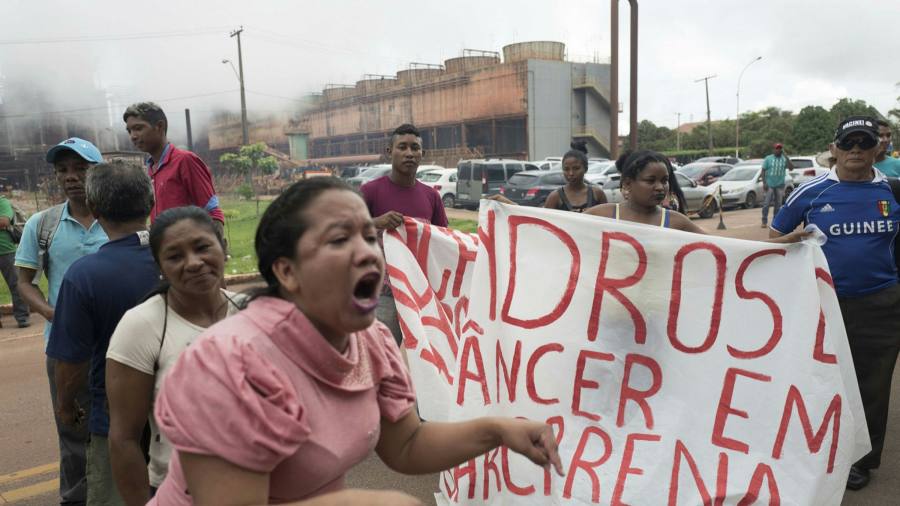 Maria do Socorro explains in graphic detail the series of ailments affecting newborns in her remote community in the Amazon: her grandson died after being born with his intestines outside his body, while others lacked ‘organs or had underdeveloped bones.

For the 56-year-old community leader, there is little doubt about the cause of these illnesses. She said the rainforest town had for years suffered from toxic waste pollution from the local operations of Norwegian aluminum producer Norsk Hydro.

Long boiling environmental scandal in Brazil, allegations were brought to the international stage this month when the Socorro community sued the Norwegian giant in a Dutch court, seeking damages for allegations that “the elimination incorrect toxic waste ‘operations in the region had caused a variety of health problems, polluted the rainforest and destroyed economic opportunities.

“We cannot have future generations because children are born and then die. Entire families are infected, ”said Socorro from the municipality of Barcarena, in the north of the state of Pará.

The case – filed just days before the UK’s highest court ruled that Royal Dutch Shell could face a lawsuit in London brought by thousands of Nigerian villagers for alleged pollution – is the latest international lawsuit pitting large resource-hungry companies against poor rural communities.

It also comes amid increasing pressure on companies to comply with strict environmental standards, a push clearly led by Scandinavian investors.

“If business can be global, why can’t justice not be done? These companies have companies all over the place, but when they do something wrong they want to stifle the possibility of people getting compensation, ”said Pedro Martins, partner at the PGMBM law firm, which represents 40,000 alleged victims suing. an action against Norsk Hydro.

Through local entities, Norsk Hydro operates three facilities – a bauxite mine, a refinery and a smelter – in Pará, a vast Amazon state that is a flashpoint for illegal deforestation, extraction of l gold and land grabbing.

The company said it would respond to the claim before the Dutch court, where its subsidiaries controlling the local entities at issue are headquartered. He denied that in 2018, pollutants from his facilities spread during heavy rains and polluted nearby rivers and land. The company declined to comment further.

A source close to the company, however, said she “had not seen the [health] effects that have been claimed. The real impact is hard to see and no studies show it. ”

A combination of poor sanitary conditions and the tropical climate could be at the root of many health problems, he added: “There are a lot of feelings and not so much of real facts.”

Locals say bauxite, lead and aluminum pollution have turned the region’s rivers red. A study by the Evandro Chagas Institute, a Brazilian public health organization, found in 2018 that the region’s waters were so polluted with industrial waste from Norsk Hydro’s facilities that they “cannot be used for recreation. , fishing or human consumption ”.

Like many Amazonian communities, much of the municipality of Barcarena depends heavily on fishing and agriculture for its survival, a job they say is now impossible.

“I invite these Norwegians to come and bathe in our waters. I challenge them. They have good water over there in Norway. Our wealth just goes there, ”said Socorro, who heads Cainquiama, a group representing mainly indigenous peoples and quilombolas – descendants of fugitive slaves.

Almost all of the plaintiffs in the lawsuit complained of chronic pain, hair loss and skin conditions. The lawsuit also contains claims relating to birth defects, such as those that affected Socorro’s grandson, who was born with gastroschisis – a hole in the abdominal wall.

“Studies carried out around the world have shown the effects [of toxic metals] on pregnant women, fetuses and children at birth, ”said Marcelo de Oliveira Lima, public health researcher at the Chagas Institute. “But so far, our studies have not been thorough enough to show [connection]. Other studies are still in progress. ”

The case is delicate for Norwegian investors and the government, which has a 34% stake in Norsk Hydro. Oslo has long attempted to hold Brasilia responsible for the environmental destruction of the Amazon, even publishing its own data on deforestation in the world’s largest rainforest.

“There seems to be some disagreement over the facts in this case and in particular the actual damage the spill had to the local environment and whether the company is somehow to blame for neglecting important measures. security, ”said Jeanett Bergan, responsible investment manager. to the KLP pension fund, Norway’s largest pension provider.

“We know that Norsk Hydro is a responsible corporate player when doing business abroad. I do not think so [this case] will damage the credibility of Norwegian actors. “

Martins, the lawyer leading the class action, said he took the case to the Netherlands because of the inertia of the Brazilian justice system. He thinks the case may end in a verdict in 18 or 24 months.

Brazil is no stranger to environmental disasters. This month, miner Vale accepted a $ 7 billion settlement with the authorities on a 2019 dam breach in the canton of Brumadinho that killed hundreds of people and polluted large areas of land with industrial sludge.

BHP was sued in a British court over the rupture of a dam in the Brazilian township of Mariana in 2015, which left 19 people dead. The case was thrown because parallel proceedings were taking place in Brazil.

“The Hydro case is attracting attention for causing significant environmental damage,” said Luiz Eduardo Rielli, director of the sustainable development consultancy Novi. “After three years, what matters most to me is: what lessons have we learned? How can we make sure that further damage does not occur? “