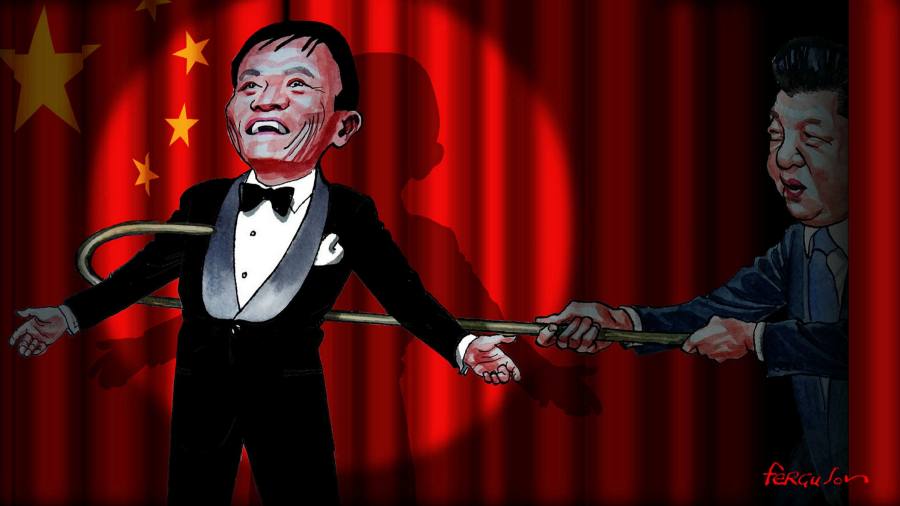 Imagine if Jeff Bezos or Bill Gates disappeared from public view and it was automatically assumed that they had been arrested on the orders of President Joe Biden and were being questioned in a secret government prison.

Such is the situation in the world’s second largest economy, where Jack Ma, the Bezos of China with over $ 50 billion to his name, has appeared just once since October – in a short video that didn’t. much to stifle the speculations that he to be held hostage by the state. Ma disappeared after Chinese authorities blocked the initial public offering of her fintech group Ant Financial, which was said to have been the highest in history.

The latest rumors suggest that he is playing golf on an island in the South China Sea and that he could still emerge with his wealth almost intact. But the brutal humiliation of China’s most famous entrepreneur reveals the sharp and growing contradiction at the heart of the Chinese state.

On the one hand, President Xi Jinping has embarked on a great project to achieve the “great rejuvenationOf the Chinese nation, which can only be achieved through rapid economic growth which relies heavily on private enterprise. But at the same time, it centralized political power, expanded the public sector, and asserted the right of the Communist Party to fit into all aspects of people’s life and affairs.

“East, west, south, north and center, the party rules everything,” is one of Xi’s favorite slogans. Although he constantly praises the orthodoxy of Marxism and “socialism with Chinese characteristics”, the uncomfortable reality is that the capitalists provide 80 percent of urban jobs and account for 60 percent of the GDP.

As a billionaire and a member of the Communist Party itself, Ma personifies the contradiction inherent in China’s government ideology. His career until the end of last year was one of the most skillful examples of entrepreneurial survival in a “Leninist market” system that eliminates alternative sources of power or authority. As in Vladimir Putin’s Russia, Chinese oligarchs are treated swiftly and ruthlessly at the first sign that they are not slavishly loyal.

Until recently, Ma played the role of pet capitalist well. I first met him in 2005 during the signing ceremony of the partnership between Yahoo and Ma’s e-commerce company, Alibaba. At the time, Yahoo was in trouble in the United States after delivering emails to Chinese authorities that led to long prison terms for journalists and human rights activists in the country.

When asked about this, Ma’s response was unequivocal: “No matter [government officials] say, we’re gonna do it. He then spoke with approval of the party’s decision in 1989 to send tanks to crush the democratic movement in Tiananmen Square. He told me in another interview that he would hand his entire business over to “the nation” at any time if the government asked him to.

Like all Chinese tech billionaires, Ma played a crucial role in the construction of a budding techno-totalitarianism. And like any rich person in China, he scrupulously cultivated party officials and their relatives. Large investors in Alibaba and Ant Financial include several “princelings”, including the grandson of former Chinese president Jiang Zemin.

Some of Ma’s current problems might stem from these bosses no longer having the political clout to protect him from a new generation of leaders with no self-interest in the world’s biggest IPO. But his biggest problem was the pride that $ 50 billion buys and the visibility that comes with being China’s most flamboyant entrepreneur.

This year marks the centenary of the founding of the Chinese Communist Party, and Xi is keen to strengthen his legitimacy by honoring the country’s socialist pedigree. It’s quite difficult in a country where the richest 20% had an average disposable income. 10.2 times that of the poorest fifth last year. In the supposedly heartless capitalist United States, the multiple was around 8.4.

Despite Xi’s past alliances with free market thought, most political signals suggest he now believes in more Marxist and socialist goals, even if his overwhelming ideology remains ethno-nationalism. But his government knows that it cannot simply nationalize private enterprise like the party did after winning the revolution in 1949.

The goal today is more subtle and difficult. Xi wants to encourage private enterprise while asserting the Communist Party’s full control over the actions, incentives and even the thoughts of entrepreneurs. In September, Beijing released a series of guidelines order private companies to set up Communist Party committees that should play a role in staff appointments and other important decisions. They clarified that businessmen should be educated to “identify politically, intellectually and emotionally” with the party. Interference with the private sector, as well as the humiliation of high-level capitalists like Ma, is likely to increase in frequency and intensity.

The big question is what does this mean for foreign investors, especially Wall Street banks and fund managers who are now piling up in China. Will icons of American capitalism such as Goldman Sachs and BlackRock really be able to align themselves “politically, intellectually and emotionally” with Xi? And how will the US government view Communist Party cells in their management structures?