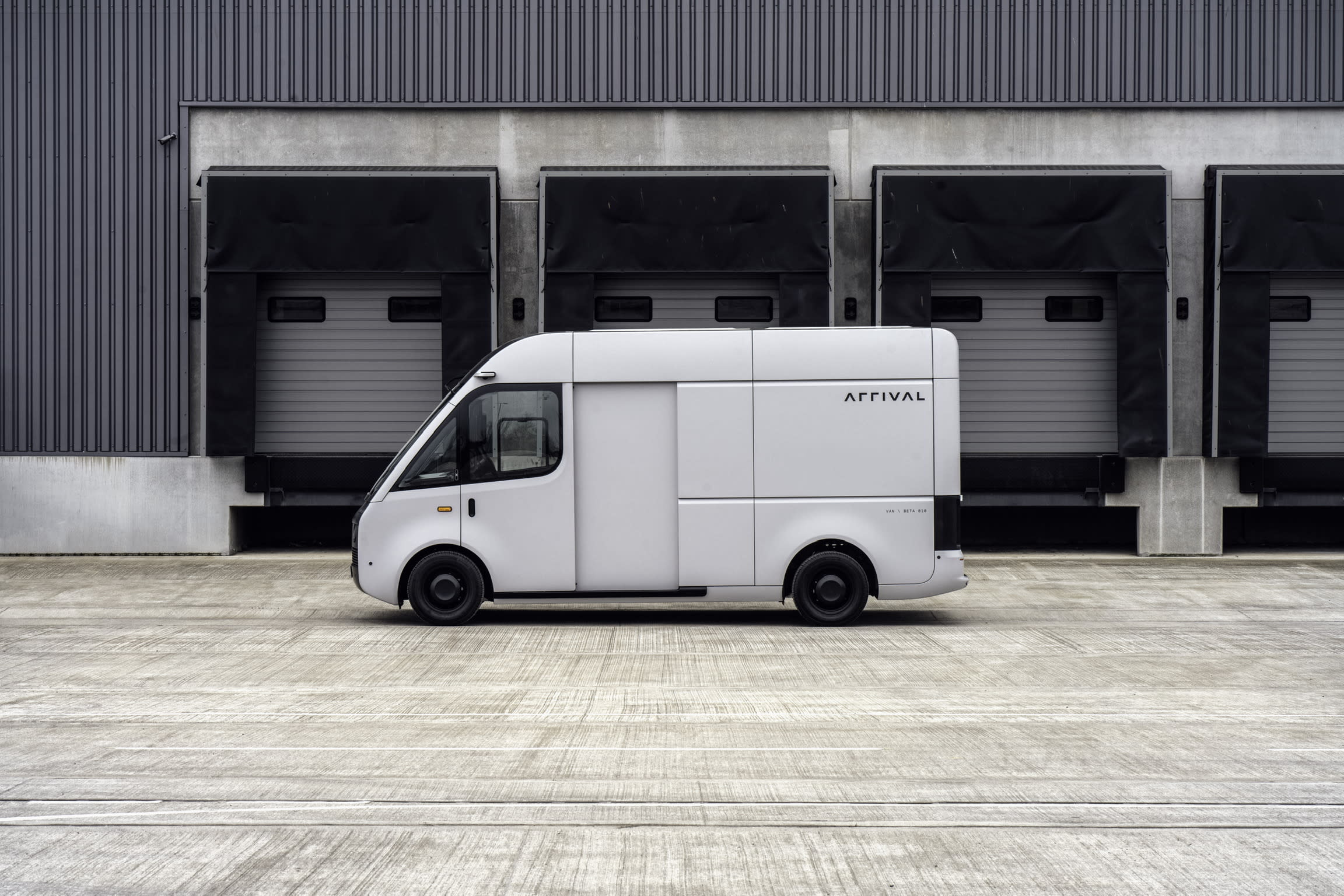 Anglo-American automaker Arrival today unveiled its electric van in a form ready to be tested. 25 vans, currently under construction in Oxfordshire, will be spending the summer on UK roads as mass production approaches. The success of these tests depends a lot, especially since UPS has already committed to purchase 10,000 units. The arrival is only five years old, but despite its relative youth, its leaders are optimistic about its potential.

Created by Yota co-founder Denis Sverdlov, Arrival focuses on building electric vehicles that don’t make headlines like electric SUVs. His first project was to reinvent the bus on a modular and customizable platform designed for cities around the world. Its second, but the first we’ll see on our streets, is a delivery van designed to disrupt commercial vehicles and parcel carts used in Europe and the United States. And it couldn’t have come at a better time.

COVID-19 has accelerated trends towards e-commerce and door-to-door delivery, with a commensurate increase in emissions. After all, online shopping leads to more midsize commercial vehicles traveling at low speeds in busy metropolitan areas. In January 2020, the World Economic Forum predicted that parcel deliveries would generate around 25 million tonnes of CO2 by 2030, an increase of six million tonnes from 2019.

But national and local leaders are laying the groundwork to ban the most polluting vehicles in major cities as 2030 approaches. California, Massachusetts, Great Britain and Germany are already working on a ban on fossil fuel vehicles, with more to follow. Likewise, President Biden pledged to electrify The US Federal Fleet and increase the cost of carbon when making purchasing decisions on behalf of the US government. So now is the perfect time to be a brave upstart delivering an affordable, reliable and efficient utility vehicle.

Arrival says its van will cost the same as the equivalent fossil fuel vehicle, but the usual savings associated with electric vehicles over the long term will significantly reduce its total cost of ownership. Electric vehicles can boast of less maintenance, emissions tax savings, and cheaper fuel costs. In addition, the company says its trucks will last much longer than the comparable gasoline equivalent. Its stated aim is to completely invalidate the economic argument for purchasing a gasoline utility vehicle.

To do this, the van uses a number of construction techniques that depart from the wisdom received from the automobile. First, the vehicle itself is almost entirely contained inside a “skateboard” (supposedly because it is relatively flat) which houses the necessary motors, batteries and controllers. On top of that, you will find an aluminum frame that has been structurally linked to the skateboard. The vehicle is then coated with thermoplastic composite panels, created from recycled materials.

Due to COVID-19, I was only able to visit the new van and Arrival Research and Development facilities in Oxfordshire via Zoom. Patrick Bion, product manager of Arrival, said the technology here is a far cry from plastic-coated cars like GM’s. Saturn, or the Chevy Cobalt, which exists as a sort of auto industry punchline. He said the company made sure his van met or exceeded current safety standards. And that the impact protection offered by thermoplastic panels can beat traditional materials.

Bion showed me a piece of fender taken from the wheel arch of a Ford Transit, the vehicle that is synonymous with European commercial vehicles. Next to it was a copy made by Arrival engineers using its thermoplastic “multifacetedBion said both panels were hit with an 8.5 kilogram (18.7 lb) border, and while the Ford panel was badly warped, the plastic only suffered a small dent. went on to say the dent could be pulled out, and any cracks in the plastic could be filled, leaving the vehicle on the road until a replacement could be found.

The Legion of Arrival of 1,500 employees, more than half of whom are software engineers, have worked to challenge dogma in the auto industry, Bion said. Skateboarding, for example, is full of custom-designed parts to ensure better reliability and space efficiency. In fact, only the battery cells themselves are sourced from a third party – LG Chem – and assembled into packs at the factory. This emphasis on integration is expected to improve both reliability and space saving.

For example, Bion said the Beta model had around 14 cubic meters of cargo space, despite its wheelbase size. If you wanted the same capacity in, say, a Ford Transit, you’ll have to go for the company’s longer wheelbase model. And Arrival also designed its first minivan model to allow full height entry and exit. It is not surprising that the company’s first customer is UPS, which registered for 10,000 vans in April 2020 to refresh its fleet of contract wagons. (UPS also has the first turndown on another 10,000 vans and has invested in the business at the same time.)

The future van roadmap will see different wheelbases and cargo sizes offered, with the smallest unit having a capacity of nine cubic meters, up to 17 cubic meters for the largest available option.

If you take a look at the 2020 UPS brand prototype, you might notice that there are some differences from the beta model unveiled today. Jeremy Offer, head of design for Arrival, explained that the company had to tweak some of the more wacky ideas after testing the initial model. The biggest change is the windshield, which was vertical in the original version and now goes from the front bumper to the roof. The flat window may have looked from the space age, but ruined the aerodynamics of the vehicle, which is crucial even for a vehicle moving through cities at low speeds.

Likewise, the driver’s seat was placed above the front axle, giving the driver more legroom and folding the wheels further back. But it also didn’t work in the real world, as it made it harder for the driver to get in and out of the vehicle. The proportions of the van have also changed in order to ensure that the vehicle remains “scalable”. Offer explained that while the prototype, in its UPS configuration where the driver could move at full height, worked, the shorter versions all looked disproportionate.

Patrick Bion, walking around the vehicle, pointed out that the roof panel that goes down to the center of the cargo space is partially transparent. It’s a design facet similar to that of the Arrival bus, with large windows and a semi-opaque roof allowing light to enter. Offering larger windows and more space to move around is part of the compromise provided by the designers of Arrival given the minimalism elsewhere in its cabin designs. There are no quirky frills in its vehicles, but instead it offers light, space, and a greater sense of freedom.

Arrivée’s unique selling point isn’t just that he designed an electric vehicle out of a clean sheet of paper and expects the world to make noises of admiration. The company repeatedly insists that its construction strategy is just as important to its future success as its wheels rolling on the road. Rather than building a sprawling factory the size of a city most often associated with the auto industry, Arrival believes smaller is better. It sets up single-line factories within the footprint of existing commercial warehouses on anonymous industrial parks.

The factory in Bicester, Oxfordshire, where the first UPS vans will be built next year, occupies around 110,000 square feet. These “micro-factories” will employ around two hundred people, divided into two teams, with robots assembling the majority of the cars. “The capital investment is less than 50 percent,” Bion said, “very low compared to a normal installation.” He added that the company plans to build each plant for $ 45 million and that its maximum capacity will be 10,000 vehicles per year. But the focus on a single production line allows Arrival to be reliable and close to its suppliers and customers. It also helps that the facilities can be distributed worldwide – a second plant in South Carolina is currently under construction.

And the production of the vans should be fairly consistent, as the company looked at the production process while it was designing the car, rather than designing the car and going back to the assembly line. Bion said the designs were designed in tandem, adding that the company was “learning from [other companies’] mistakes ”, especially those who found the transition from small-volume to mass-production players less than easy.

Arrival’s speech to its customers is that these vehicles are specially designed for large logistics companies around the world. And there are enough options – in terms of battery size – to meet the needs of hyper-local delivery companies down to those that cover hundreds of miles a day. Each van can be fitted with a 44 kWh battery to a 133 kWh unit, depending on the expected range. And when those cells are past their maximum, the company will work to replace them, keeping vehicles on the road longer than their gasoline-powered predecessors.

Going forward, the company is also sketching out different cabin height and wheelbase options, as well as different goals. It can start its life as a delivery van, but if all goes according to plan, Arrival will introduce cabin, van and even passenger van options in the next few years. But until then and now, these 25 vehicles must prove to everyone that we are ready for an electric revolution in the world of logistics.

Of course, there are challengers: the GMs BrightDrop Unit, which made headlines earlier this year, is working on its own electric van as part of an electric “ecosystem” for logistics. The EV600 promises a similar electrified ride, but with a greater focus on freight. In the meantime, Amazon and Rivian work on a square van designed to fit into this company’s extensive supply chain. And Canoo is working on a small van that may be looking to enter similar territory in the next few years. The trends only go one way, but it will be up to each business to determine whether it can translate the promise into success.