“ After a year, we are back to square one ”: Milan under the influence of Covid 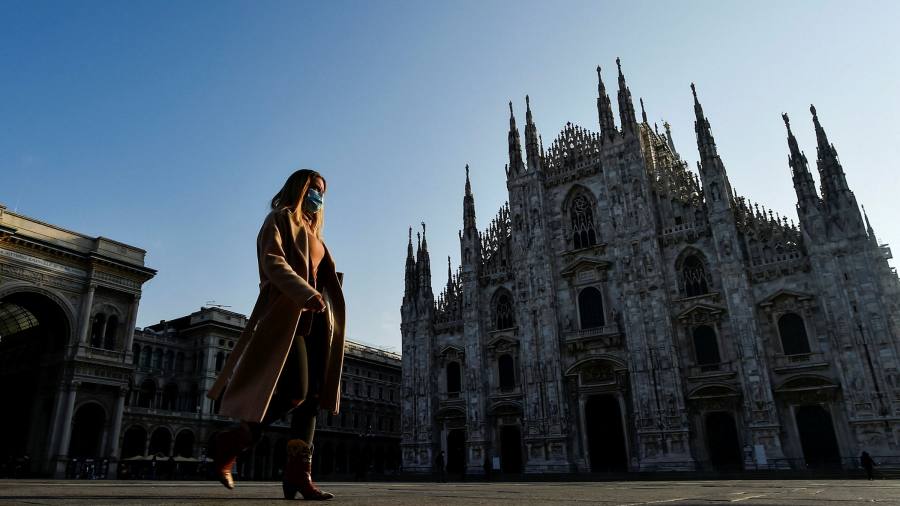 Around the same time last year, chef Andrea Berton believed customers “might overreact” when they started canceling tables at his Michelin-starred Milan restaurant amid an increase in cases of disturbing new coronavirus.

“It was a strange atmosphere,” he recalls this week. “The restaurant was suddenly empty at lunchtime and international customers kept calling to cancel reservations and events around the Salone del Mobile,” he added, referring to the annual trade fair. Milan furniture.

Neither he nor anyone else could have predicted what would happen next. Days later, on March 8, the Italian government ordered the immediate lockdown of the wealthy region of Lombardy which includes Milan in a bid to stem the spread of Covid-19. The unheard-of restrictions were extended nationwide the next day, confining 60 million people to their homes.

It was the moment when Europe finally woke up to the threat of a virus that had emerged in China at the turn of the year. Within weeks, the entire continent – and soon the entire world – had been brought to a halt by the pandemic.

“We were faced with a virus we knew nothing about,” said Francesco Passerini, mayor of the small town of Codogno, an hour from Milan, where one of the first confirmed cases of Covid-19 in Italy had been discovered end of February. “We didn’t know how to protect our community and we had very sick people. It was like an impossible fight.

A year later, the end of the coronavirus crisis in Europe still seems far away despite the hope offered by vaccines. Most of the continent’s 750 million citizens continue to face restrictions in their daily lives and the economic and social toll has been enormous.

In Italy – as in some other EU countries such as neighboring Greece and the Czech Republic – the number of new infections is rising as concerns mount over the threat of the new variants. Lombardy, still the worst-affected region in Italy, struggles with thousands of new cases a day and hundreds of deaths every week.

A new two-week partial lockdown went into effect in the region on Friday, with offices closed and employees required to work from home. Schools and playgrounds are closed and hospitality and travel are banned, although shops remain open – for now.

Still, as cases increase, experts fear it will be only a matter of time before the curbs are extended.

“It won’t be long before the whole country returns to the ‘red zone’,” Guido Bertolaso, Lombardy’s vaccine adviser, said this week, referring to the strictest level of Italy’s system of colored levels.

“Unfortunately, it’s not over yet,” said Passerini, the mayor of Codogno. “But it’s not comparable to last year because we learned to live with the virus and now we have a vaccine. So we have something to look forward to. “

Looking back evokes painful memories. Most striking was the day he and other volunteers had to empty a church to make room for dozens of coffins. “I remember seeing the corpses come in and the church, a place of hope, suddenly turn into a morgue. I couldn’t believe this was happening, ”he said.

In the weeks and months that followed, Carla Sozzani, owner of 10 Corso Como, a cultural, shopping and gastronomic destination in Milan’s nightlife district, couldn’t get used to the silence in a famous city. like a center teeming with industry, banking and fashion. .

“The only noises you could hear day and night were the ambulances and drones they were using to check that no one was leaving their homes,” she said. “It was disturbing.”

Mired in a series of lockdowns, Milan only welcomed a fraction of the 10 million tourists who came in 2019, a shortfall that has strained its economy.

It is hoped that the new government of Mario Draghi, a seasoned crisis manager who previously headed the European Central Bank, can make improvements by accelerating vaccine deployment and leading an economic recovery.

Sozzani, an avowed optimist by nature, was certain Milan would regain strength in time for the rescheduled Salone del Mobile in September, once more people had been vaccinated. “The fair is a symbol of Milan and it will represent its rebirth,” she said.

As a sign of his frustration at the slow pace of deployment, Draghi has decided to block the export of 250,000 doses from Oxford / AstraZeneca to Australia so that they can be used in Italy. As of this week, however, less than 6 percent of Italians had received a first dose of the vaccine.

A Milan-based anesthesiologist, who did not wish to be named, also warned that intensive care units at hospitals in the region were filling up quickly.

“It reminds me of last spring,” she said. “The vaccine gives us hope for the best, but we have to plan for the worst, because the deployment is too slow and people are dying.”

Berton was forced this week to close his restaurant again, a ‘stop-go’ approach he said would kill his business and other businesses in the city.

“I never imagined it would last this long,” he added. “After a year, we are back to square one.”