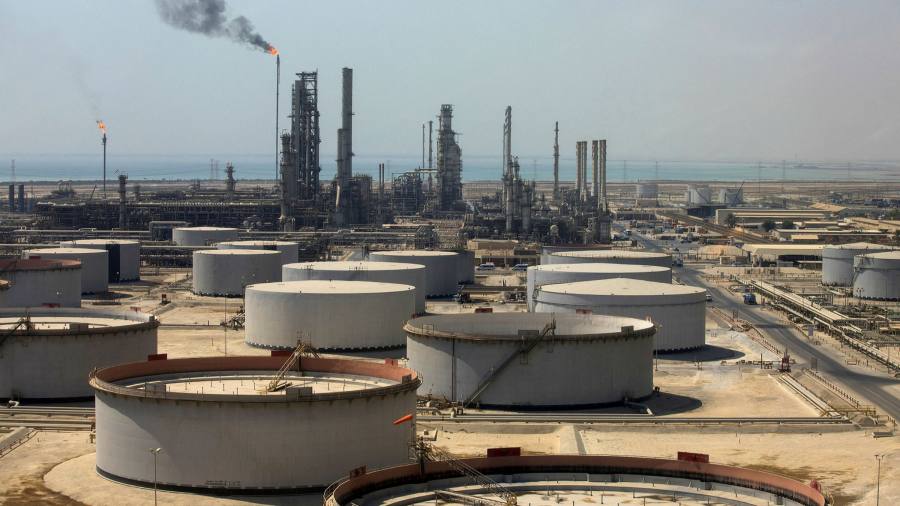 Saudi Arabia, the world’s largest oil exporter, said its energy facilities were attacked on Sunday, targeting “the security and stability” of global supplies.

A drone attack from the sea on an oil storage tank in Ras Tanura, one of the world’s largest oil transport ports, took place on Sunday morning, the kingdom said.

In the evening, shrapnel from a ballistic missile fell in Dhahran, where the state oil company Saudi Aramco is headquartered and near where thousands of employees and their families live.

Iranian-allied Houthi fighters from Yemen claimed responsibility for the attacks and said they had also focused on military targets in the Saudi cities of Dammam, Asir and Jazan.

A Houthi military spokesperson said the group fired 14 bomb-laden drones and eight ballistic missiles in a “massive operation in the heart of Saudi Arabia.”

A spokesman for Saudi Arabia’s energy ministry said the attacks “did not result in any injury or loss of life or property.” A person familiar with the matter said no production had been affected.

Amrita Sen, Energy Aspects, pointed out that while a direct impact on oil supplies appeared to have been avoided, the threat to the market would still be taken seriously by oil traders.

“The price of oil was already on a solid footing after Saudi Arabia and Opec last week to continue restricting production,” she said.

Brent, the international oil benchmark, has increased by nearly $ 70 per barrel since the cartel and its allies outside the group, including Russia, have decided not to launch a flood of crude on the market.

Amid uncertainty over the outlook for the oil market as the coronavirus crisis continues to impact demand for crude, the group has decided not to increase production by 1.5 million barrels per day from ‘April.

Given the supply restrictions, while the kingdom has the additional production capacity to exploit, “geopolitical threats to supply will add a premium to the price,” Sen added.

The kingdom’s state media said earlier today that the Saudi-led military coalition against the Houthis intercepted missiles and drones aimed at “civilian targets” without indicating their location. Eastern Province, where Dhahran is located, is where much of Saudi Aramco’s oil facilities are located and the attack is the most serious since September 2019.

At that time the kingdom was rocked by missile and drone fire which hit a major processing facility and two oil fields, temporarily shutting down more than half of the country’s crude production.

The Houthis have stepped up attacks on Saudi Arabia via air strikes and explosive-laden boats and mines in the Red Sea, exposing the vulnerability of the country’s energy infrastructure despite the kingdom’s production prowess and its hold on the oil market.

“The frequency of these attacks is increasing, although the impact on energy infrastructure appears to be limited,” said Bill Farren-Price, director of research firm Enverus. “We know that the capacity to cause serious damage exists, which will increase the risk premium for oil.”