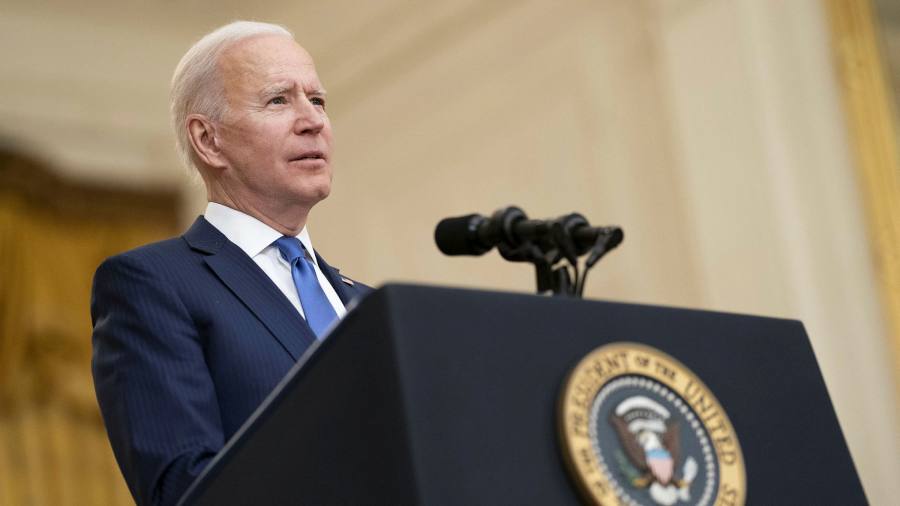 The Paris-based international organization said it expects a stronger rebound from last year’s historic recession than it expected in November, mainly due to the rapid roll-out of immunization programs Covid-19 in many countries and increasing U.S. stimulus spending.

The scale of the Biden plan will add about 1 percentage point to global economic growth in 2021, Laurence Boone, the OECD’s chief economist, told the Financial Times.

As a result, the global economy will grow 5.6% this year, according to the OECD forecast on Tuesday, an increase of 1.4 percentage points from its November forecast.

The stimulus bill – known as the American Rescue Plan – is one of the U.S. government’s most significant interventions in the post-World War II economy. It is expected to be passed by the Democratic-controlled House of Representatives on Tuesday after the US Senate votes to approve the package on Saturday.

The stimulus package helped fuel a powerful shift in global stock markets. Firms seen as beneficiaries of stronger economic growth, such as banks and airlines, have started to rally, while tech stocks such as Netflix and Amazon, which performed strongly at the height of the crisis. Covid-19 crisis, have receded in recent weeks.

It also sparked a strong sell-off in the bond market, as expectations of faster price growth in the United States were heightened. Higher inflation is bearish for bonds because it eats away at the fixed income streams they provide.

The Biden package “was trying to start a new episode where you have higher growth and you move away from too low inflation,” Boone said, although she added that “it would have been nice” to see “a bit. more “of the money spent on investment.

The OECD significantly revised upward its growth forecast for the United States this year, from 3.2 percent in its November forecast to 6.5 percent.

Due to their trade relations with the United States, Canada and Mexico are also expected to benefit from the US stimulus, which will boost their growth this year by around 1 percentage point compared to November forecasts, the OECD estimated. .

In Europe, the boost will be closer to 0.5 percentage point, as the positive effects of the Biden stimulus will be partly offset by the delay in vaccination programs, which will delay the easing of coronavirus restrictions and generate a longer hangover from the crisis, the OECD warned.

Boone said: “Europe is not doing enough on the vaccine. Countries are supporting their economies and this is very welcome, but before adding to the existing stimulus they should step up vaccination and reopen their economies. “

The OECD has revised its forecast for the UK for 2021 and 2022 upwards by 0.9 and 0.6 percentage points respectively due to the success of its vaccination program.

The US stimulus package will raise domestic inflation, but not to a dangerous level, Boone said, because [US] labor markets ”. Although there are ” [price] pressures in some areas, ”she argued that the stimulus measures should not lead to widespread upward pressure on all wages, leading to persistent inflation.

And investor expectations for inflationary pressures in other regions, like Europe, were less likely to materialize, she added, in part because immunization programs were progressing more slowly.

The optimistic outlook for the United States will also help ease the long-term scars left by the crisis, the OECD said. Advanced economies will be close to their pre-pandemic growth path by the end of next year, he said.

Emerging economies will fare worse, remaining 3 to 4 percent below their pre-virus production trajectory at that time, according to forecasts, although that would be a much better result than forecast for the OECD just three months ago.

“The amazing tax support everywhere means that we have preserved the economic fabric in OECD countries. Even in emerging markets we have seen incredible political support, ”said Boone.

The countries most dependent on tourism face the greatest challenges to ensure a stable recovery, the OECD has warned, while its broadly optimistic outlook depends on the successful acceleration of production and distribution of Covid-19 vaccines.

He also assumed that the world would remain largely free of vaccine-resistant mutant strains of the virus.

To keep the recovery strong, the OECD recommended that countries first ensure they have a strong immunization strategy and maintain strong budget support to boost growth, and then redirect government support to high-growth areas of the world. economy such as digital and green investments.

“Early signaling of the future alignment of long-term price signals with environmental and climate policy objectives, including through carbon pricing, would reduce environmental policy uncertainty and improve the prospects for financing investments in clean technology, ”said the OECD.