US, China lay groundwork for first high-level meeting under Biden 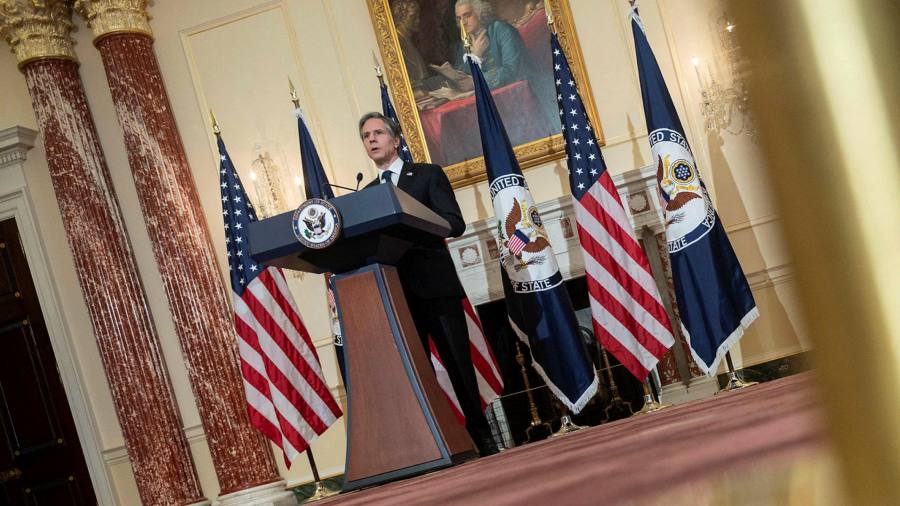 Washington and Beijing are working out details of the first high-level meeting between rival powers since President Joe Biden took office, according to four people familiar with the talks.

The terms of the high-level engagement are still being negotiated, but if successful, Antony Blinken, Secretary of State, and Jake Sullivan, National Security Advisor, will meet with their Chinese counterparts.

One option would be for Blinken and Sullivan to talk to Wang Yi, China’s foreign minister, and Yang Jiechi, China’s top foreign policy official, in Alaska, two people said.

The state is being considered as a possible location as Blinken could return to Washington via Anchorage after his next trip to Japan and South Korea. The United States is also considering options that would include only one of the two officials meeting with their Chinese counterpart.

A person familiar with the situation pointed out that the talks were continuing and that no decision had been taken on when or where.

Any meeting would be a meaningful development after Biden took a tough stance on Beijing and signaled he would hold China responsible for any “abuse.” These include the Chinese crackdown on Muslim Uyghurs in Xinjiang, the crackdown on the pro-democracy movement in Hong Kong, and assertive actions against Taiwan.

Biden raised these questions during his first appeal with President Xi Jinping, even though Yang had warned the United States not to cross such “red lines”. Sullivan also said the United States would impose costs for any egregious behavior. In his first call with Yang, Blinken said Washington would hold Beijing “responsible for its abuses of the international system.”

If Sullivan and Blinken meet with Yang and Wang, it would be the first time that a U.S. national security adviser and secretary of state have jointly met with Chinese officials. The White House and the State Department have made no comment. The Chinese embassy in Washington did not immediately comment. The South China Morning Post first reported that the two sides were in talks.

The decision to embrace a meeting with China comes as Biden prepares to call a summit with other members of the “Quad– Japan, India and Australia – Friday. The four nations are trying to work together more closely to counter China, but without creating an overtly anti-Beijing partnership.

Defense Secretary Blinken and Lloyd Austin are preparing to visit Tokyo and Seoul next week. Austin will also be visiting India.

Two people familiar with the situation said Washington wants to make sure it doesn’t completely sideline China while urging its allies to work with the United States to take a tougher stance on Beijing.

Tensions remain high between the powers and the United States has warned that China has bridged the military divide in the Indo-Pacific.

Admiral Philip Davidson, head of the Indo-Pacific Command, said on Tuesday that the U.S. military was lose his advantage as China continued to erode decades of US-led deterrence in Asia.

“We are accumulating risks that could prompt China to unilaterally change the status quo before our forces are able to provide an effective response.” Davidson told the Senate Armed Services panel.