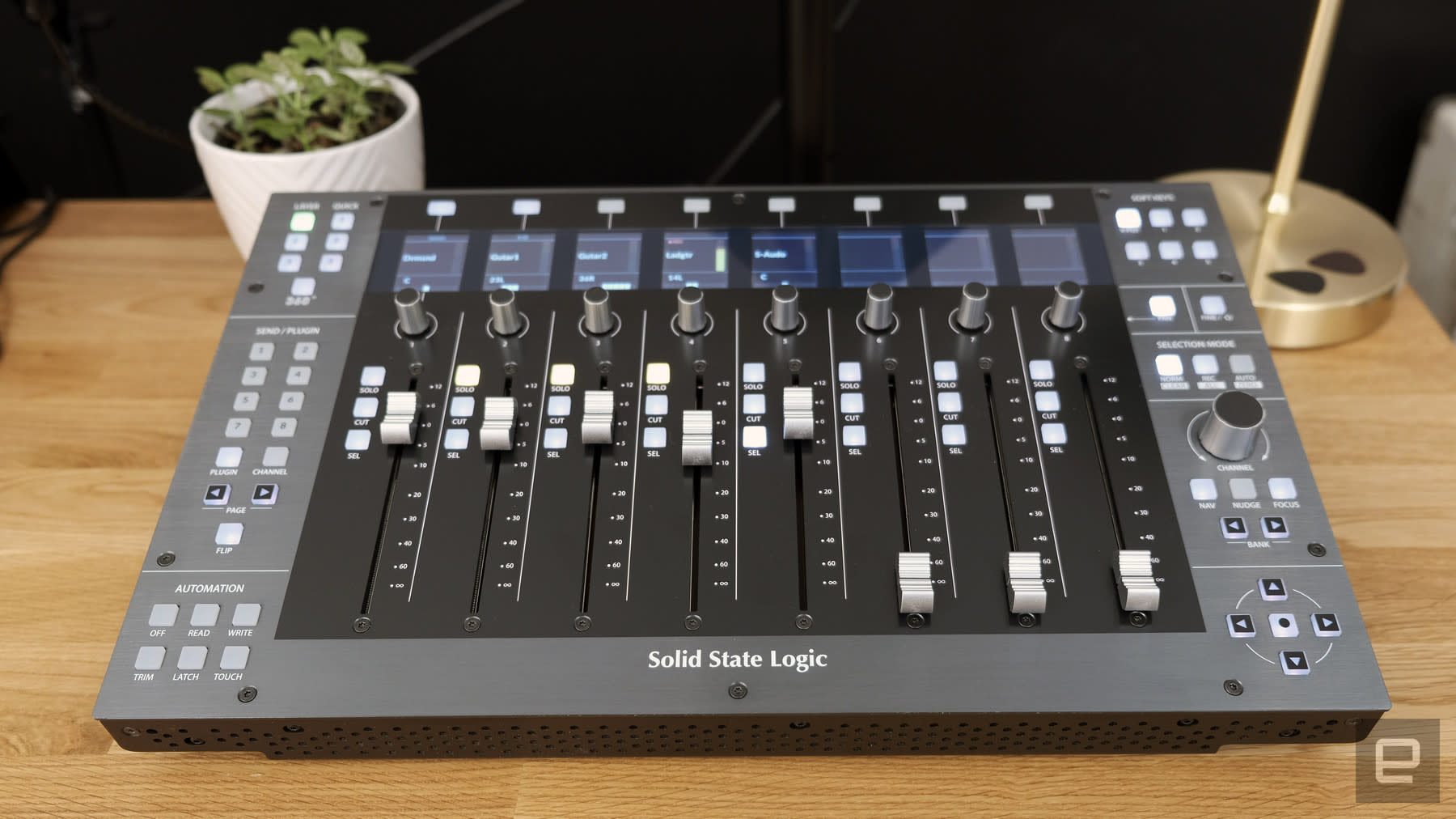 My studio setup, like that of many bedroom producers, is a mishmash of random nonsense. Honestly, there are a lot of issues in my current workflow, but one of the biggest is mixing. I use a Tascam 424 Portastudio (yes the kind that records on cassettes) as a submixer, before moving to Ableton where I do most of the heavy lifting. You can’t beat a modern DAW for its vast array of controls and automation, but clicking and dragging buttons and sliders is just plain disappointing. Solid State Logic (SSL) UF8 gives all of these virtual controls a physical embodiment. It is not the first mixer controller, nor the cheapest, but it is certainly one of the most complete and premium options on the market.

At $ 1,299 the UF8 is not for casual amateur musicians. You have to take your trade seriously enough to drop that amount of money on something relatively niche. Remember it’s just for the mix and transport controls, you’ll still need a separate controller to play music, you know. But I will say that after a week with UF8 on my desk, I get the call.

Physically, this thing is nothing but pure pleasure. The whole device is covered in metal and the top has a nice brushed texture. The motorized faders are smooth and quiet, and the encoders offer just a hint of drag – they definitely make my Tascam feel like a toy. The faders are certainly not quiet, but they aren’t annoying as long as you have the speakers at a reasonable volume. It is certainly an expensive luxury to have on a controller, but not unnecessary. If you’re going back and forth between your screen and the faders, you want the two to mirror each other.

The buttons also make it quick and easy to select and arm tracks for recording, mute or solo them, and even tackle things like sending effects or controlling your tracks. different plugins. Training myself to stop relying on my mouse and keyboard was tough, but when I remember looking for the UF8 first, it’s always a tactile pleasurable experience.

The basics are pretty obvious if you’ve used a mixer or DAW. There are eight faders (one for each channel); with the select, mute and solo buttons next to them; eight encoders on the tops of the faders which by default control the panning of each track; and a small display that gives you information about each track, comments on parameters and indicates what the encoders and softkeys at the top are controlling at any given time.

The problem is that some of the more advanced tools (like plugin control) can be just a few button presses away, and it’s not always immediately clear how to get there. The eight screens give you a fair amount of information, but the controls and labels are constantly changing. I’m sure I would get used to it in time, and it’s an inevitable byproduct of putting so much power into a relatively compact form factor, but it can be a bit confusing.

For example: let’s say I have a simple session set up with drums, software synthesizer, and bass on tracks one, two, and three respectively. All tracks also have a compressor and an EQ plugin on them. If I want to change the equalizer settings on track two, I must first select the channel in normal mode, not in record mode. Then all the indicators under each channel will change to list the different plugins on that channel. This means that even though the large label on the screen above track 1 says “Drums”, the small text below will say “ANLG”, because Ableton’s analog synthesizer is the first plugin for track 2. which is currently selected. And while the Track 1 fader will still control the drum volume, the encoder that normally controls the panning will no longer do anything when you turn it.

From there, I’m going to have to find the EQ plugin (which, for argumentative purposes, we’ll say it’s after the compressor and under track three) and hit the encoder below. At this point, all encoder labels will change again to reflect the EQ plugin controls. From there you turn these knobs to find the settings you want. And you might even have to go through multiple pages of settings. Again, this puts complete control at your fingertips, but it can be a bit confusing while you still find your footing.

The depth of the controls, however, is truly impressive. Out of the box, the UF8 works fairly seamlessly with Ableton, Logic, Studio One, Cubase, and Pro Tools. There are templates for each DAW that you can select and then customize to suit your needs. There are three “quick” keys at the top left that you can program to perform certain tasks, such as switching between layout and session view in Ableton, or opening your plugin browser. In the upper right corner are six soft keys that change what the row of eight buttons at the top does. The first point is set in stone, but the other five banks of controls are user assignable, so they can start and stop playback, set punch in points, activate the loop, or even trigger keyboard shortcuts.

Adjusting all these settings is also very easy with the SSL 360 app. It even has its own dedicated button on the face of the UF8. So if you suddenly want to have one button access to save your project or go full screen, you can immediately go to the configuration tool and have it done. (Honestly, the one button save should be in the default command selection, but I digress.)

If you take the time to learn UF8 and adapt it to your workflow, I could see it’s a big plus. As much as I’m used to doing most of my mixes and the like with a keyboard and mouse, having faders that I could move in real time and control multiple tracks at once was amazing.

But the price will be a limiting factor here. While SSL says that the UF8 is designed with both the professional and the amateur in mind, I find it hard to see too many weekend warrior musicians picking one up. $ 1,299 is a lot to ask, even for something with that premium feeling. Instead, I imagine it will fit better in homestudios of pro producers and as a complement to SSL’s huge pro consoles, like the $ 50,000. Origin (of which UF8 sits just to fit perfectly in the center of).