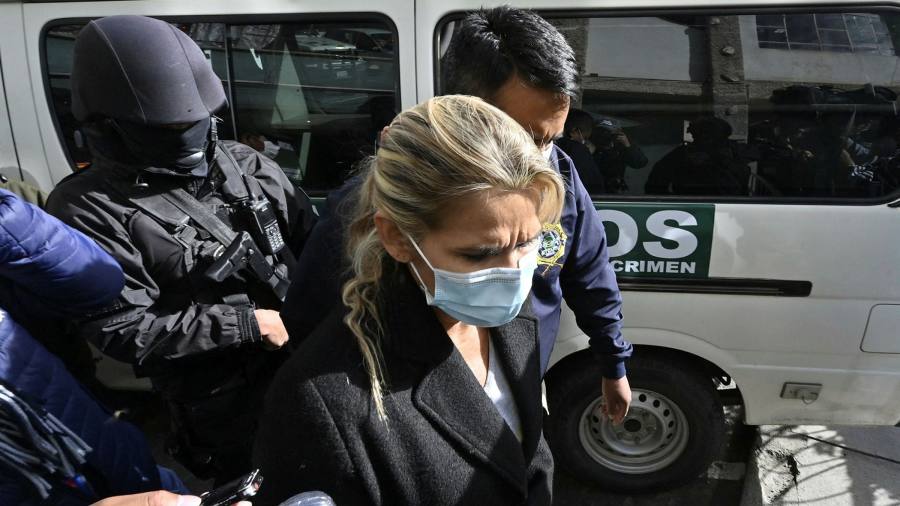 The Bolivian socialist government has arrested former interim president Jeanine Añez and issued arrest warrants for several key members of her administration for terrorism, a move that the opposition and a human rights group have called unjustified and political persecution.

The move heightened political tensions between the ruling party Movement Towards Socialism (MAS) of indigenous leader Evo Morales and its opponents from all political backgrounds in the impoverished Andean mining nation.

Interior Minister Eduardo Castillo announced on Saturday that Añez had been arrested by police and praised the officers for what he called “this great and historic task of bringing justice to the Bolivian people”. Two former ministers were also taken into custody.

Jose Miguel Vivanco, Americas official at Human Rights Watch, said the arrest warrants against Añez and his ministers contained no evidence that they had committed terrorist crimes. “For this reason, they raise justified doubts that this is a politically motivated process,” he said.

The arrests are linked to events in late 2019, when Morales fled the landlocked country amid massive protests after trying to win a fourth consecutive term in office in an election marred by what the Organization of US states and the EU have determined to be serious irregularities.

Añez, then a conservative provincial senator, was next in the line of constitutional succession because Morales’ vice president and senate leader had resigned alongside her, meaning she was hastily sworn in to lead a interim government recognized by the EU and the United States.

Añez’s government came under heavy criticism from rights groups while in power for calling for Morales to be arrested on terrorism charges after he fled the country. The charges were dropped shortly after MAS returned to power last year.

Morales and the MAS never admitted that the election was fraudulent and described the events of November 2019 as a “coup” promoted by reactionaries and the military with backing from Washington.

If you have won a democratic victory, why do you need to do this?

The caretaker government’s awkward measures, including mismanaging the pandemic and exceeding his interim administration tenure by prosecuting Morales and some of his officials, led to a landslide victory for MAS candidate Luis Arce in the election presidential elections of last year.

Since returning to power, the MAS has cracked down on opponents and Friday’s arrests, as well as detention warrants for former police and armed forces chiefs, suggest the government now wants to punish anyone linked to the interim administration. . .

“A lie has been invented, an alternate reality, a supposed and non-existent coup to generate political persecution, to destroy opponents and to install the lie inside and outside the country that there is had a coup when what It was in fact a gigantic fraud, a great electoral crime, ”said former opposition presidential candidate Carlos Mesa.

In a tweet shortly before his arrest, Añez said: “The MAS has decided to go back to the methods of dictatorship. Too bad, because Bolivia does not need dictators, it needs freedom.

The country, long troubled by political instability, is sharply divided between MAS supporters, concentrated in the poorest rural and mountainous areas, and the opposition, whose supporters are mainly from the richer towns and plains.

The MAS failed to win any of the four biggest cities in local elections last weekend, when they lost control of the longtime fortress El Alto, just outside the city of La Paz, in the profit of a former senior MAS official who had left the party.

“There is a feeling of sadness at this point,” said a diplomat in La Paz. “The MAS was at a crossroads when Arce was elected last year. They could have chosen to rule like a normal government and tolerated some opposition. But they seem to have chosen to go the Evo path by tolerating no opposition at all. If you have won a democratic victory, why do you need to do this? “